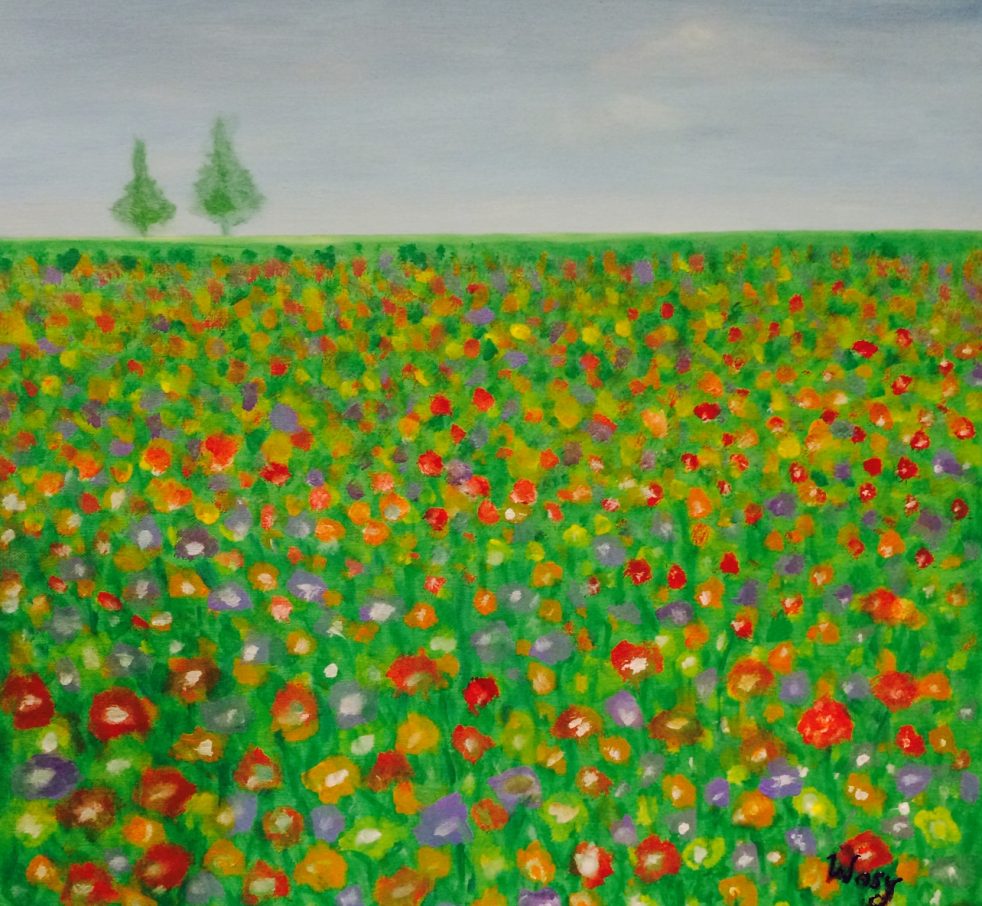 Recently, I have been doing some spring cleaning. Elli and Char are growing up. Unknowingly, they have outgrown many of their clothes. 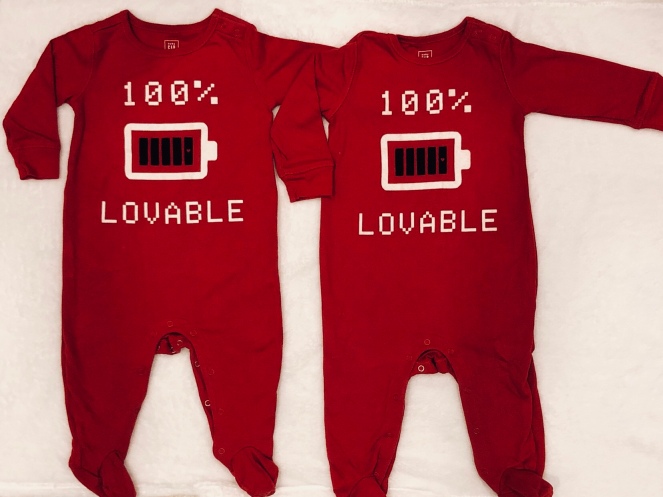 I found these 2 Onesies particularly endearing. They wore it during their virgin trip to Perth and looked absolutely darling in them. They just turned 1 then too. I decided to upcyle these onesies by creating a memory bear out of them.

After doing some research on Memory Bear Patterns and on how to sew it. I came up with my own pattern using one that I really liked on Etsy. It was kind of exciting as it was my first time doing one; I had no idea how it would turn out. 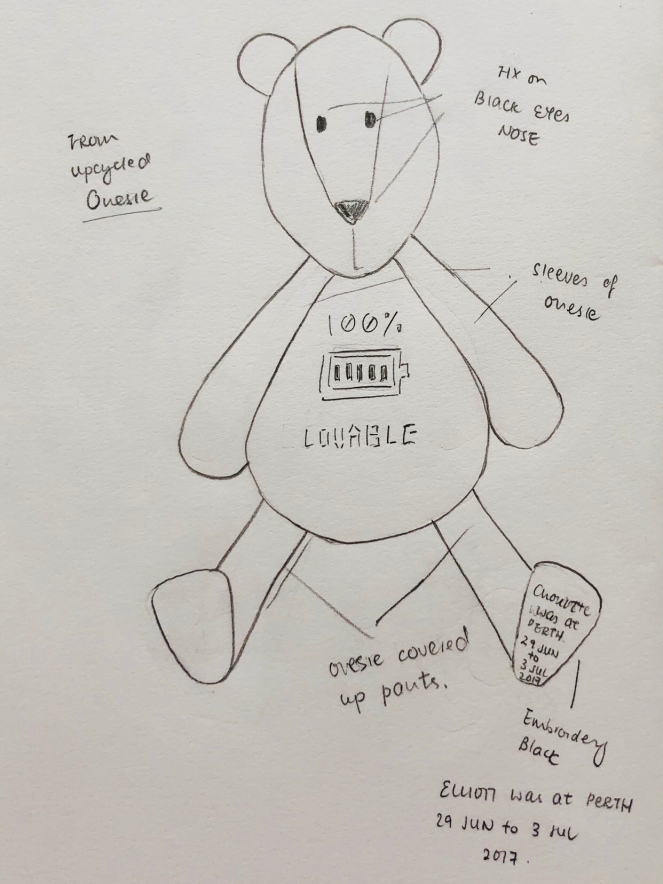 After much struggle, I managed to cut the onesies up! ( Just couldn’t bear too)

Here are the parts I cut out.

If You Do Decide To Do One Yourself

There are many Memory Bear Patterns on Etsy which you could purchase. Alternatively, you can find many on Pin Interest to refer to as well.

I modified a pattern that I liked. Instead of cutting out pieces for the legs, I used the onesie’s already sewed legs portion for the Bear’s legs. 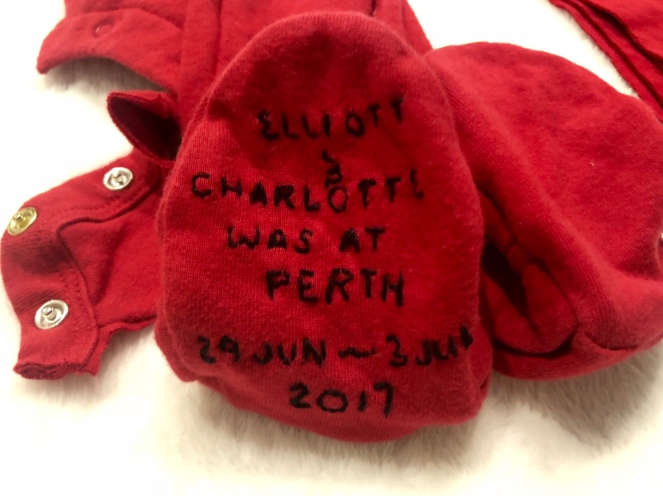 I did an Embroidery to the foot sole for a personal touch. ( Spotted the grammatical error, it was too late when I realised.)

Here’s a good video by Whitney Sews on doing your own Memory Bear https://youtu.be/-YIOLXnBrdQ

I did mine quite similar to the video above. Some steps differ, which I will touch on later in my post.

Feel free to tweak it to your own liking. I upcycled mine from my kid’s onesies. Be Creative, that’s when the fun begins. You can source for ideas from Pin Interest, my favourite avenue.

Here’s a run through on how to sew one:

I started of by sewing the Bear ears. 2 pairs of it in total.

Place right sides together, 2 pieces each for the ears.

Sew the curve edge ; leave the straight side open. Do it similarly for the other ear.

Remember to clip the curve edge as shown in the image above. This will give you a nice curve shaped ear when you turned the right side out.

Once done, stuffed the ears slightly and sew along the straight edge of the ears. 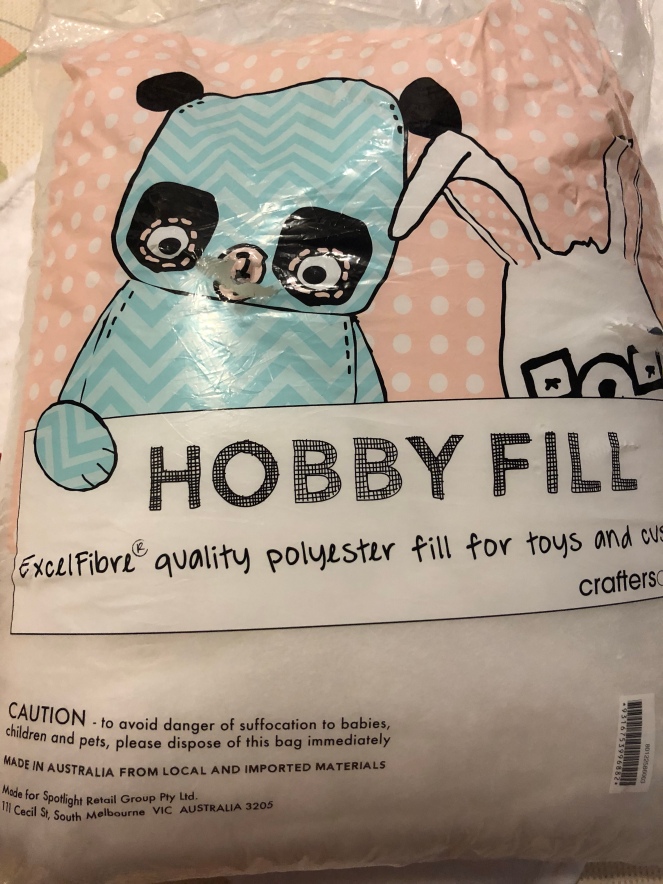 I used hobby fill for my stuffing. They are so soft to feel and do not create lumps.

Here’s a tip: To Check if stuffing is of good quality, take a handful and squish it to a ball. If the stuffing remains as a tight ball,it will create lumps. However, if it goes back to original form, stuffing is ideal for the bear.

Place the right sides of the 2 Side head pieces and sew along the centre edge. As shown in diagram 1.

Match the edges of the 2 Side heads and the Center head and sew along the curves.

After turning the right side out, you should end up at diagram 3.

Remember to clip all the curve seams. This would Ensure a defined Bear’s head. 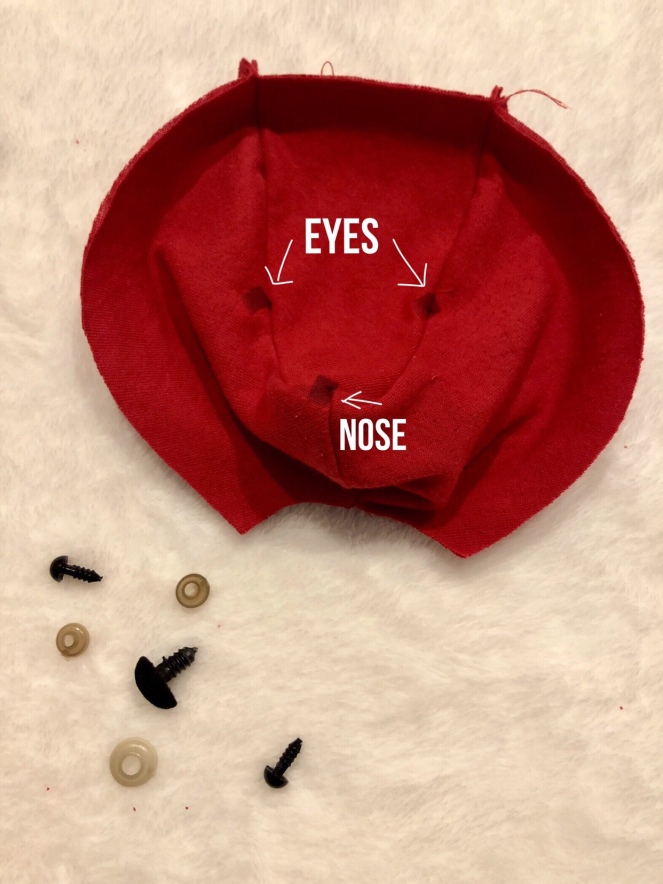 Next would be the installation of the child safety eyes and nose. Remember to mark the spots before doing so. 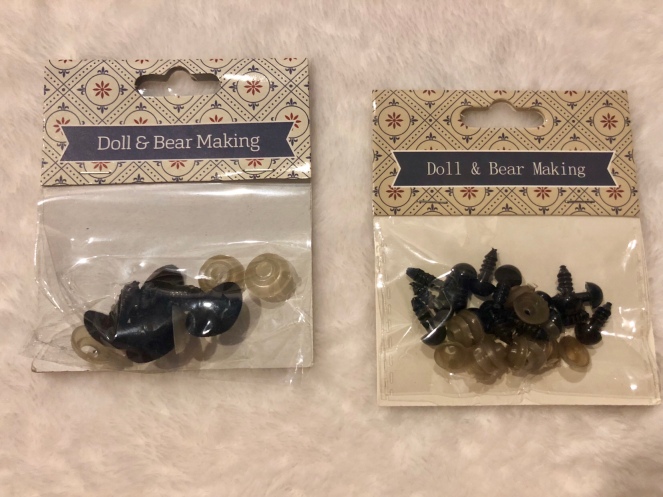 I got these child safety eyes and nose from spotlight.

Each child safety eyes and nose should consist of 2 pieces. The front which is the plastic eye/nose with the threaded backing. The back which is called the fastener or washer that will keep The Eye/nose in place.

How to install the eyes and nose to your Memory Bear.

First, create a hole through the spots marked earlier for the eyes and nose. I used my thread picker followed by a scissors to achieve this.

Next, insert The Eye/ nose. Make sure you have the eyeball and nose at the right side of the fabric before securing it with the fastener.

The bigger opening side of the fastener should be facing the fabric as you fit one through the threaded rod of The Eye/ nose backing. The protruded side with the smaller opening should face upwards and be in the same direction as the threaded rod; secures The Eye/nose to the fabric.

Once done, you should end up as the above image.

Next position the bear’s ears to the bear’s face ( follow pattern markings) and sew down.

Place right sides together of the Head back and sew along the center seam.

Clip the curve edge of the center seam.

Flip right side up and you should have something similar as the image above.

Next ,place the right sides of the Head Back and the Bear front face( sewn Side and Center Head pieces) together. Match the edges and pin down.

Sew along the curve edge leaving the neck edge open.

Flip right side up and you will end up with the completed Bear’s Head as show in the diagram below. 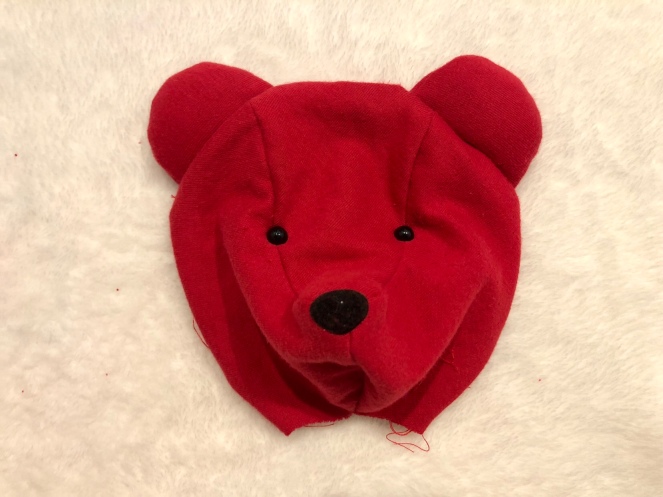 The Bear’s Legs were made directly from the cut out leg portions of the my Onesies.

If you are going to do Memory Bears from upcycled Baby Onesies like mine. This next step will come in handy for you. ( This step differs from the video which is to attach the leg pattern and sole of the leg together to create the Bear’s leg)

First, button up the leg portions of the onesies.

Hand sew ( Ladder Stitch/ Slip Stitch ) along the buttoned up piece of the leg pieces. Leave an opening of 5 cm. This is for stuffing the leg up later.

Do not cut the thread but wind it figure of 8 around the needle as shown in the image above; this is to prevent entangling of the thread.

Here’s a tip: When cutting the legs portions from the Onesies, bear in mind that it will be attached to the body later. Thus, Ensure that the snap buttons ( if there are any) will not be an obstacle to the attachment.

Place the right sides together of the Front Body pieces and sew along the center seams.

Clip the seams, then attached the Bears legs portions, as shown in the image above. 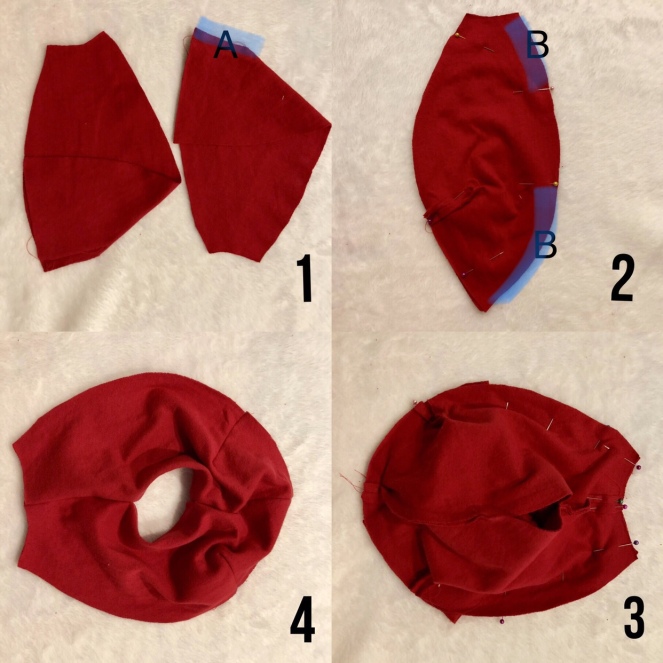 Sewing the Back Body pieces together is slightly tricky. I do recommend watching the video tutorial by Whitney Sew, she did a very good step by step on it.

First, fold one piece of the Back Body piece as shown in diagram 1. Sew along the blue highlighted edge A.

Place the right sides of the Bear Front Body with the Back Body piece together; please remember to tuck the legs in!Pin down. I personally made a mistake here by not doing so and took an hour to unpick. It was hard work!

All pieces of the Memory Bear ready to be attached!

Unfortunately, I forgot to take a photo of the Bear’s hands;making in process. However, it is simple and here’s how.

Sew the 2 arm pieces right sides together. Remember to leave an opening for stuffing. Clips the curves. You should have 2 pairs of arms. Flip right side up and you should end up with all the parts as shown in the image above.

Place the arms in position and attach them to the body. 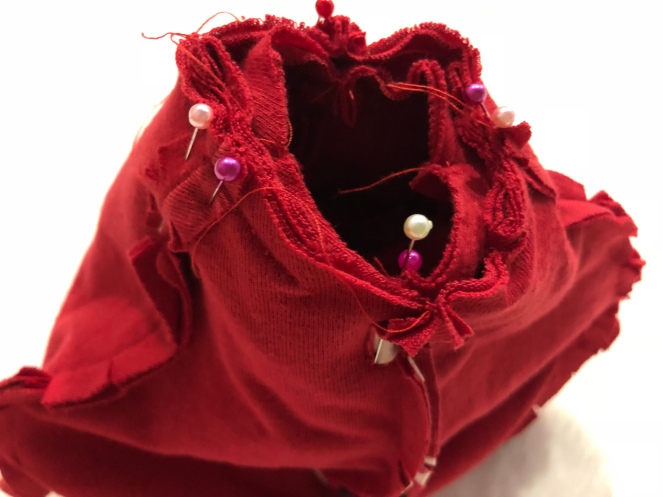 This is probably the most exciting and important part of sewing the Memory Bear.

Once you have attached the arms, turn the body wrong side out.

Insert the head, right sides together with the body. Match the seams and sew together. I reckon sewing by hand if you are a beginner in using the sewing machine. This part is really tricky as you have very little space to work with while sewing the seam.

Once done, flip right side up carefully from the opening at the Bear’s Back.

Tada! Your Memory Bear is so ready to be stuffed!

Stuffing the Bear and Final Stitches

The bear’s legs were first to be stuffed up. I hand sewed up the openings using similar ladder stitches as before.

Close up on the finished sewn Bear’s leg 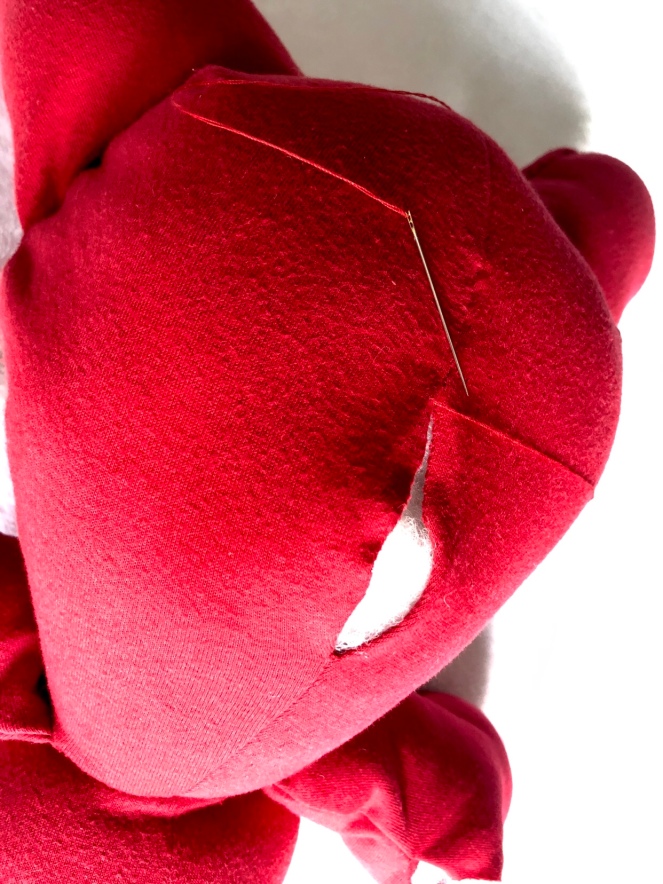 Slowly stuff up your Memory Bear and ladder stitch up the openings.

I hope you had fun in creating your own personal Memory Bear. My Red Bear was a hit with the kids especially Elli. I think the creativity in a Memory Bear is endless. I am definitely doing more bears in future. ( Tots just outgrow their clothes in a blink of an eye!) Imagine a bear for each milestone, or to commemorate an important memory.

Looking good all stuffed up. 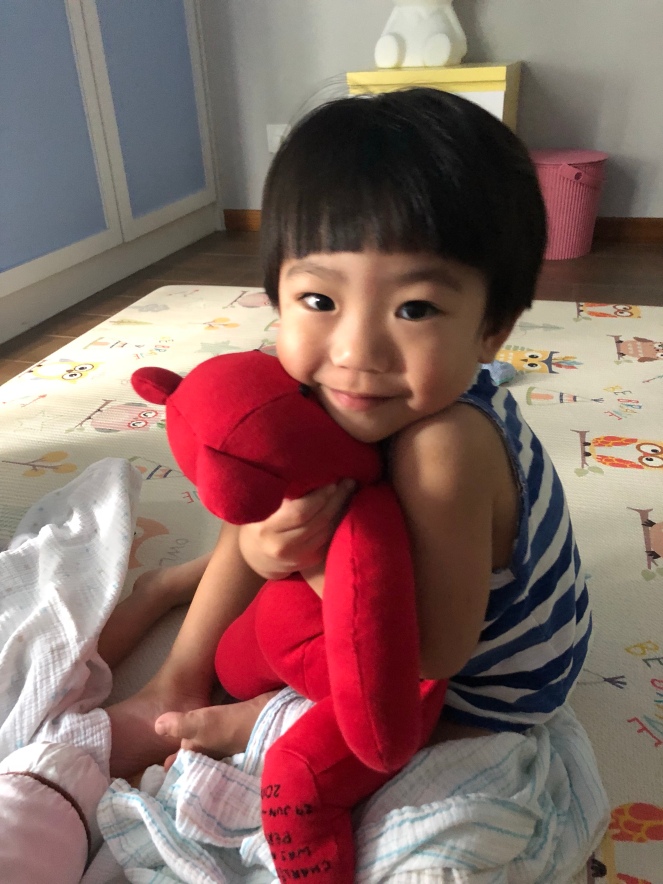 All good feels doing the Memory Bear, when you see your little boy snuggling up to the bear a tad too tightly.